The World According To Monsanto-

CHARLES MANSON “RELEASED” FROM THE SHU (HOLE) AFTER 345 DAYS… 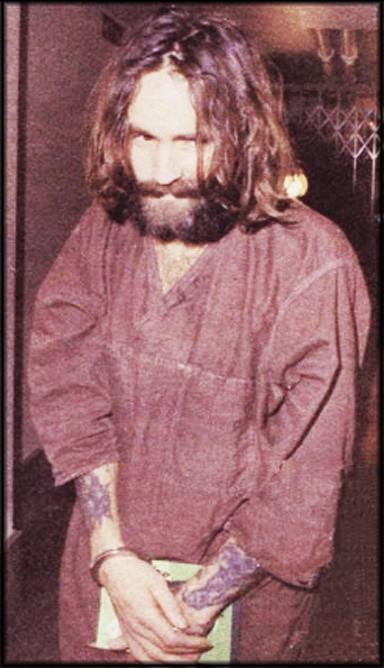 Charles was released from the hole, or the “secure housing unit”,
after serving close to one year in solitary confinement- one of many inhumane forms of american “justice”-
on September 14, 2012.

To display his strength and resilience under the draconian weight of this latest bogus “disciplinary action”
imposed upon him I have cut a couple pieces from a conversation with him yesterday, in order for others to hear his voice…
from the black hole-
X- Haze

"...Know this: from the prison graves the Christhead is no new trip, and the so-called Christians have been and are feeding on the blood of Christ children. You are so misled and caught up in lies that your souls and your justice are locked in the bank. Actors play your leaders in the same war patterns set by the dead..."

I have been reading The Manson File- Myth And Reality Of An Outlaw Shaman after waiting years for this English translation, and after (again) reading Nikolas Schreck’s inclusion of Charles’s statement to the board and to the world I was moved to post it here – into the world – yet again…
FORTY THREE YEARS!

“Just as a circle embraces all that is within it, so does the Godhead embrace all. No one has the power to divide this circle, to surpass it, or to limit it.”
To do so will be your destruction.

Note for the record. In the all that was said about me, it was not me saying it, and if you see a false prophet, it is only a reflection of your judgments, for in truth, it is motions, not words, that speak for the Manson family. We each have our own worlds and judgments. I have no judgments outside of what you all have set for yourselves. I’m content wherever I am. Whatever you do or say does not touch my inner circle. I have peace within myself. Peace of mind.

“I forgive and it is in my will to forget. But for the last  (forty three) years, there is no forgiveness.”

RAGS, THIS IS A LETTER TO YOU, By Charles Manson (from The Manson File: Myth and Reality of an Outlaw Shaman, by Nikolas Schreck – Used with permission)

The Manson File- Myth and Reality of an Outlaw Shaman (used with permission from the author, Nikolas Schreck) and photo of Charles, courtesy of an old mailer from World Order Media

Some old poetry of Charles’

RAGS, THIS IS A LETTER TO YOU
(from The Manson File: Myth and Reality of an Outlaw Shaman, by Nikolas Schreck)
“It is my hope and dream
To hook up through the satellites
With everyone that’s in the Family
Red and Blue, Green, Gold, and Yellow
All the girls that are in jail with me
That gave their lives, took their lives
Gave their lives again
This is on the other side of the noose
That hangs in the sky
Where the infinite consciousness
Within all living things cry
Sometimes you can just hang there and fly
I was going to give you some poetry
Of how it feels to be lonely
To be alone, with no one, sitting down in the hole
No letters for five years
Just turned sixteen
I almost got adopted once
But they took a guy who was deaf and dumb
Brought him to California
Put him on a ranch
He took a gun and started shooting cows
Johnny Holiday
All the cowboys in Rio were like outlaws
Steel sharpened
Knives came through the spirits eyes
Landed right on my tongue
I had to learn everything all by myself
The first thing I learned was:
Don’t Trust Anyone
No more than you do yourself
If we’re gonna do something in this world
We’ve gotta do it right
Underneath all that ever was
Reasons and rhymes wound up tight
Astral flight my spiraling staircase dreams
Lucifer my brother, died of strings.
Come on in, with your organ, cupid-man flies
Coming down the highway, crystal palace dreams
Dreams dreaming’ on, know what I’m feelin’
Far is the country, way out on a balmy sea
Sail-Sailing on home boy, sailing on home
Singing it on home”
-CHARLES MILLES MANSON

Monsanto is killing the Earth.

“Monsanto is the world’s leading producer of the herbicide “Roundup”, as well as producing 90% of the world’s genetically modified (GMO) seeds.
Over a 110 year history (1901-2011), Monsanto Co., the world’s largest seed company, has evolved from an industrial chemical concern into a powerful, threatening agricultural products company. Monsanto profited $2 billion dollars in 2009, but their record profits fell to only $1 billion in 2010 after activists exposed Monsanto for doing terribly evil acts like suing good farmers and feeding uranium to pregnant women.
Monsanto is a US based agricultural and pharmaceutical monopoly, Monsanto Company is a producer of herbicides, prescription pharmaceutical drugs, and genetically engineered (GMO) seeds. The global Monsanto corporation has operated sales offices, manufacturing plants, and research facilities in more than 100 countries. Monsanto has the largest share of the global GMO crops market. In 2001 its crops accounted for 91% of the total area of GMO crops planted worldwide. Based on 2001 figures Monsanto was the second biggest seed company in the world, and the third biggest agrochemical company…”

True evil has a name: Monsanto

And from prior posts at IRONLIGHT (source)- Monsanto

“The Monsanto family were the first documented Jewish settlers to have migrated to New Orleans from the Netherlands in 1758. They were known slave owners and slave traders of 18th century. In 1901, the Monsanto family founded their eponymous chemical company. Its history is intimately linked to the production and promotion of highly toxic chemicals such as the herbicide, Agent Orange (used as a chemical weapon in the Vietnam war, resulting in 400,000 deaths and disabilities, and 500,000 children born with birth defects), and PCBs (polychlorinated biphenyls, which can affect fertility, child development, the immune system, and increase the risk of certain cancers). Monsanto has known about the “systematic toxic effects” of such chemicals for decades, but has instructed its salespeople to maintain silence because, “we can’t afford to lose one dollar.” The gigantic biotech corporation now imperils the agricultural biodiversity which has supported life for thousands of years. The endless list of genetically modified seeds now sold and controlled via strict patents by Monsanto endanger age-old agricultural patterns under the presumptuous slogan of ending world hunger. What they really want is to control the future of the world’s food supply — that is, to enforce world hunger — much in the same manner, and with the same effect, that they control every aspect of life in occupied Palestine today. -W.” 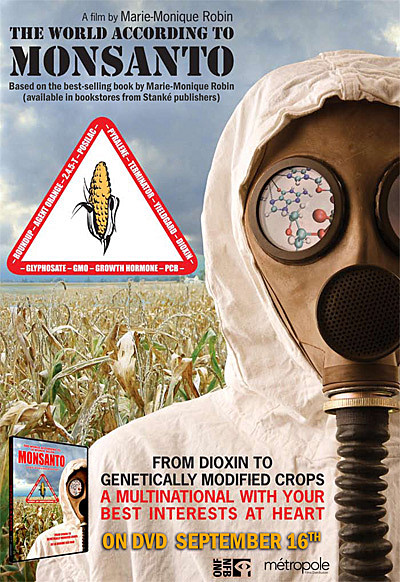 The World According To Monsanto-