“There is no way to get away, except, if we all get away together. We can all get away from it together, but the way to get away from it is, we’ve got to replace it with something brand new. So as we run from our problems, we don’t go to war with ourselves, we war against what’s already at war with us. So we transgress against no one who’s not transgressing against us, and we love everyone that loves us. Those who play and prey upon us as if we were the prey, and they were the predator, will find that that the ultimate end is that everything turns around, and all those who have played the prey are now the predators. And all you big bad motherfuckers out there, who think you’ve got over and got away with something – the only thing you got away with is your own destruction. Because it’s right behind you in all shapes and forms. Because in righteousness, there is a divine, and in righteousness, that person that you think has been following you, is God. He follows you all. God, not in the shape and form as a religion, or propaganda, or programming by some Jew’s media, but the righteous of all that is real within the soul of all you can feel. And your observation is the most powerful thing you’ve got. So the suggestion is from the devil himself, you use your powers of observation, and begin to look around you and find out just exactly… where your socks are, haha, and who’s got your shoes, and which way you’re gonna be going from now on. And it’s not what NBC and CBS and ABC is telling you. You better get to looking at your rainforests. Better get to looking at your subjugators. Subjugators, that’s you, we’re talking to you, wake up subjugators. We know you’re not alligators, cause you don’t have teeth, hahaha you lost your teeth…”

The Truth On Those Drones 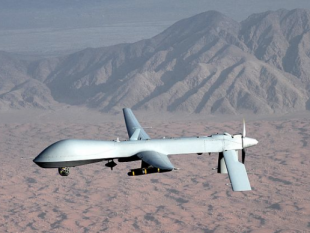 This week, news of leaked top secret intelligence reports regarding the secretive “drone wars” has further illuminated the deceptive modus operandi of this Nation<Empire.
The rhetorical explanation for the authorization of these unmanned drone strikes has been only to target “specific senior operational leaders of al-Qaida and associated forces”.
“It has to be a threat that is serious and not speculative,” President Barack Obama said in a Sept. 6, 2012, interview with CNN. “It has to be a situation in which we can’t capture the individual before they move forward on some sort of operational plot against the United States.” But this same man said he would close Guantanamo…
But this latest report, ALONE, speaks fucking volumes of the LIE that is the U.S.A.-

During a twelve month period in Pakistan, ending in September of 2011, at least 265 of up to 482 “targets” (people murdered by “reaper” and “predator” unmanned drones with no provocation or chance to fight their “enemy” unseen high above them in the sky, remotely operated from a fucking video game) were only suspected, or “assessed”, of having views of “extremism”.
Out of these 482 deaths only 6 were top al Qaida leaders.
According to this report, source above- McClatchy, “At other times, the CIA killed people who only were suspected, associated with, or who probably belonged to militant groups.” Probably?!
The report also raises the use of “so-called “signature strikes”, in which unidentified individuals are killed after surveillance shows behavior the U.S. government associates with terrorists, such as visiting compounds linked to al Qaida leaders or carrying weapons.”
“The documents also reveal a breadth of targeting that is complicated by the culture in the restive region of Pakistan where militants and ordinary tribesmen dress the same, and carrying a weapon is part of the centuries-old tradition (def. 1.the transmission of customs or beliefs from generation to generation, or the fact of being passed on in this way) of the Pashtun ethnic group.”
These fucking desensitized gamers are striking the first to respond to the initial drone strike!
These same CIA and military gamers are also striking at the funerals of the ones killed by the prior strike,
after surveilling who seems to be of importance by the “behavior” witnessed among the mourners, for example who is being hugged the most-
“Information, according to one U.S. intelligence account, indicated that Badruddin Haqqani, the then-No. 2 leader of the Haqqani network, would be at a relative’s funeral that day in North Waziristan. Watching the video feed from a drone high above the mourners, CIA operators in the United States identified a man they believed could be Badruddin Haqqani from the deference and numerous greetings he received. The man also supervised a private family viewing of the body.
Yet despite a targeting process that the administration says meets “the highest possible standards,” it wasn’t Badruddin Haqqani who died when one of the drone’s missiles ripped apart the target’s car after he’d left the funeral.
It was his younger brother, Mohammad.
Friends later told reporters that Mohammad Haqqani was a religious student in his 20s uninvolved in terrorism; the U.S. intelligence report called him an active member – but not a leader – of the Haqqani network. At least one other unidentified occupant of his vehicle perished, according to the report.”

Reports from the Bureau of Investigative Journalism estimates that up to 3,581 people, including up to 884 civilians, have died in drone strikes in Pakistan from 2004 to 2013. Deplorable violations of International Law- The Hypocrisy of the united states of america.

Last month I asked Charles what he thought of “those drones”, and his quick reply was right on point…