Thic Quang Duc- 1897- 11 June, 1963-
-A Vietnamese Mahayana Buddhist monks protest against the Roman Catholic persecution of Buddhists by South Vietnam’s “Ngo Dinh Diem” Roman Catholic administration. A self-immolation. Almost fifty years ago… He rotated a string of wooden prayer beads and recited the words “NAM MO A DI DA PHAT” (homage to Amitabha Buddha) before striking a match and dropping it on himself.
Many people are familiar with this image of Thic Quang Duc’s self-immolation- but I don’t think very many have seen the actual footage of it as in the video below- 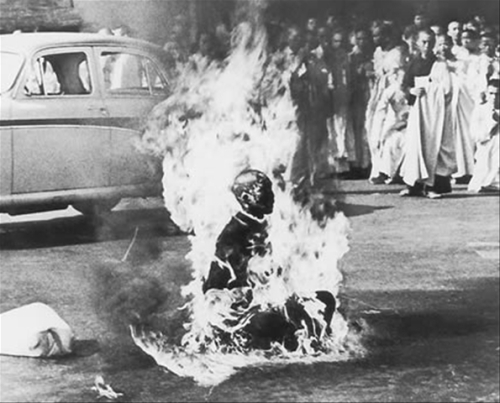 Thic Quang Duc's last words from a letter, "Before closing my eyes and moving towards the vision of the Buddha, I respectfully plead to President Ngo Dinh Diem to take a mind of compassion towards the people of the nation and implement religious equality to maintain the strength of the homeland eternally. I call the venerables, reverends, members of the sangha and the lay Buddhists to organise in solidarity to make sacrifices to protect Buddhism."

This year there have been many other cases of such sacrifice from China that remain unseen, and unrepresented in the mainstream media- young Tibetan Buddhist monks who have taken vows of non-violence, and whose sole purpose and goal in this life is to bring an end to all beings suffering. These young humans of peace are so determined to draw global attention to one of the world’s longest standing human rights crises that they are courageously giving up their lives in protest. Just last week Tenzin Wangmo, a 20-year-old nun, set herself on fire and died- in hopes that the world might see…
In Rememberance:
Tenzin Wangmo, nun, 20 years old, 17 October
Khayang, 19 years old, 7 October 2011
Tsewang Norbu, 29 years old, 15 August 2011
Phuntsog, 21 years old, 16 March 2011
FREE TIBET
-Don’t forget the catalyst to the Tunisian Revolution- the self-immolation of Mohamed Bouazizi, on 17 December 2010.
Extreme oppression (with no acknowledgement from a world of superpowers that claim to represent “humanitarianism” and “equality” and “freedom”) can fuel such desperate acts of courage. Strength and Will. The west cannot grasp such sacrifice…
X- Haze